We have developed a technique for specific drug targeting to digestive tract regions using electrostatic polysaccharide characteristics to cause gelation. An in situ double cross-linking process, mediated by Ca2+ and SO42-, of chitosan and alginate administered to the mouse gastrointestinal tract by double gavage, was used for gel formation. The technique not only allows researchers to target drug to different regions of the gastrointestinal (GI) tract by modulating polymer concentration but also significantly reduces degradation of the drug as well as side effects. Using this new technique, lower doses of drug can be efficiently loaded and delivered at specific target areas of the GI tract.

Techniques to deliver drugs into the gastrointestinal (GI) tract can include the provision of drugs in solution. However, such drugs will be directly affected by the pH of the stomach and are likely to be degraded under acidic pH conditions. To circumvent degradation by acidic pH or digestive enzymes, high drug doses or frequent administration are commonly used and side effects may be problematic. Recently, complicated techniques such as sprays of micro- or mini- emulsions with high drug doses have been used; these approaches lack targeting to specific areas of the gastrointestinal tract. Enemas are often used to target drugs to the colon but the procedure is cumbersome and is associated with high risk of local complications including bleeding or perforation in small animals. Thus there is an unmet need for targeted drug delivery to specific areas in the GI tract, particularly the colon.

Biomaterials must show biocompatibility, biodegradability, and bioactivity. The latter is the main criterion for a biomaterial used as a drug delivery system. Such systems are varied, ranging from metallic implants to polymers. The latter are widely used because polymers can be associated with co-polymers, and can be grafted, degraded, and acquire hybrid characteristics when associated with cells. Polymers such as poly(lactic-co-glycolic) acid (PLGA), poly(lactic) acid (PLA), and poly(ethylene glycol) (PEG) are usually modified and used to form films (1), or for nano- or microparticle-mediated (2) drug delivery. The range of possible polysaccharide uses (Table 1) is as wide as polysaccharides are diverse. Polysaccharides are biodegradable and biocompatible natural polymers (and are approved by the US Food and Drug Administration [FDA]), so such materials are widely used in applications such as the cosmetic industry (3,4) tissue engineering, or other biological projects, with attention to polysaccharide charge and mass characteristics. Thus, nanoparticles (5-7) can be used as drug delivery systems (8, 9) and, more specifically, as electrically charged molecules in electronic applications such as those requiring electroactive nanocomposites (10). When polysaccharides are used as biomaterials, size and charge regulate the kinetics of drug delivery (11, 12). Our technique is based on formation of a hydrogel by ions (Ca2+ and SO42-) that mediate cross-linking between alginate and chitosan. Other polysaccharides can be used in this technique because polysaccharides generally share similar electronic proprieties (13).

The principle point of the double gavage method for drug delivery is that it allows a “macro hydrogel” to form in the stomach (Figure 1). The first gavage contains the polysaccharide material that contains the drug. As the polysaccharides biomaterial is still liquid at the time of gavage, this technique overcomes the limitations of the size of the animal mouth and allows an easier way to administer in addition to the ability to administer higher concentration of drug. Then a second gavage will be performed with an ionic mixed solution of calcium and sulfate. As soon as the ions and the polysaccharides solution are mixed, a hydrogel is formed. The final volume of the biomaterial formed will be 150 μL.

An option of technique is to perform it twice. The method can be called double “double gavage” method. The purpose of this is to prevent early drug degradation during digestion process. The first double gavage is made with a concentrated drug solution. The second double gavage is done with a drug free polysaccharide solution to recover the biomaterial (Figure 2). This is an “onion-like” structure (8) and has two advantages (Figure 2). First, this original structure can prevent a quick release or “burst effect” of the drug from the hydrogel because the external layer, containing no drug, is the first to be degraded. Secondly, the kinetics of release (GI tract pH gradient from acid (pH=2) to neutral pH (pH=7), digestive enzymes . . . ) is surface dependant. This structure has the minimal surface contact between the hydrogel and the external medium and allows the drug to be completely separated from the degradation interface. After gavaging the polysaccharide solution into the stomach of a small animal, the ions in the solution form a hydrogel of the maximum possible size. Use of “macro-size” biomaterial reduces the contact surface between the drug and the aggressive digestive medium (Figure 3). This technique allows all types of encapsulation, including that of nanoparticles, liposomes, or drug molecules alone.

Using the unique “double gavage” method, we have shown that a combination of alginate and chitosan at a weight ratio of 7:3 is appropriate for delivery of an encapsulated product to the colon. As shown in Figure 4, most gel-loaded nanoparticles labeled with dextran-FITC were released in the colon after complete collapse of the hydrogel. The alginate and chitosan can be made with different concentrations, ratios, or types of polysaccharides to make the hydrogel collapse in a specific region of the digestive tract.

The hydrogel is based on association of two polysaccharides, alginate and chitosan. Both are biocompatible and biodegradable, so they are widely used in the food industry, biology, and medicine (14).

Alginate is extracted from brown algae. Alginate is a linear co-polymer with homopolymeric blocks of (1-4)-linked beta-D-mannuronate (M) and the C-5 epimer, alpha-L-guluronate (G), respectively. By gelation using divalent ions (such as calcium), alginate can be easily used as a biomaterial and is biocompatible. Alginate has been used to form beads carrying divalent ions for cell encapsulation (15), as a sponge for drug delivery, or as a wound-healing gel (16).

Chitosan is a linear polysaccharide composed of randomly distributed beta-(1-4)-linked D-glucosamine (deacetylated units) and N-acetyl-D-glucosamine (acetylated units). Chitosan is susceptible to gelation when SO42- ions are added. Chitosan is used in our work because: (1) it is specifically degraded in the colon by colonic bacteria, thus collapsing the whole gel (17) (it follows that chitosan can be used as a targeting biomaterial); and (2) chitosan has a well-known positive effect on inflammation because the material has anti-bacterial action (18).

Delivery of the biomaterial into the mouse stomach TIMING 15 min

As shown in Photograph 1, the hydrogel (here loaded with Alcian blue for better visualization) formed immediately in the stomach; the photograph of stomach contents was taken 30 sec after double gavage. Depending on the proportions and concentrations of alginate and chitosan, and the polysaccharides used for the biomaterial, the hydrogel will collapse in a specific region of the digestive tract.

An example of the potential of the double gavage method is colonic delivery. As shown in Figure 4, we added a fluorescent probe trapped on nanoparticles to the hydrogel (made from alginate and chitosan at 7 g/L and 3 g/L, respectively). Our data (n=3) showed that the fluorescent dextran released from nanoparticles was much more common in the colon than in other regions of the gastrointestinal tract. This specific targeting is obtained by the specific collapse of the hydrogel in the colon according to pH and time of digestion rather than by simple diffusion of nanoparticles through the polysaccharide hydrogel. This technique allows researchers to overcome the limitation of pellet size in ingestion by small animals. The use of 150 microliters total hydrogel allows delivery of a large amount of bioactive compound and obviates the need to use difficult techniques such as drug microencapsulation.

This work was supported by National Institutes of Health of Diabetes and Digestive and Kidney Diseases under a center grant (R24-DK-064399), RO1-DK061941-02 (to D. Merlin), RO1-DK55850 (S. Sitaraman). Dr. Tracy S. Obertone proof-reads this manuscript, we appreciate her genuine contributions.

Photograph 1: Picture taken 30 sec after laparotomy following double gavage to form a hydrogel loaded with Alcian blue. The “blue” biomaterial formed has been extracted from the stomach. 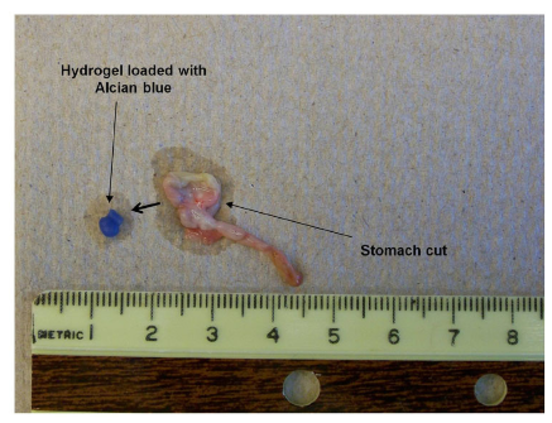 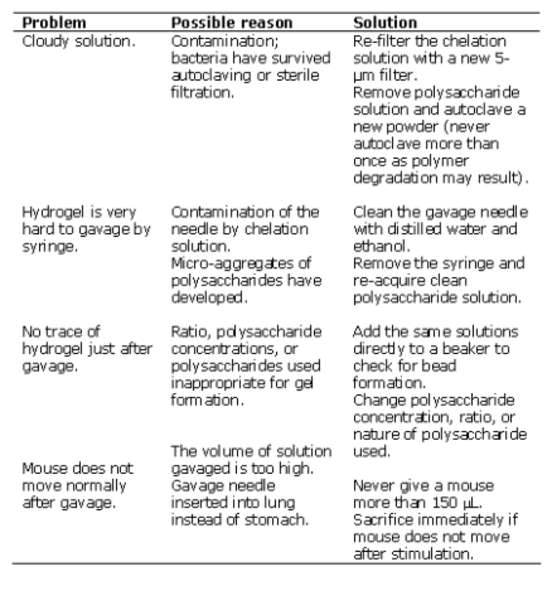 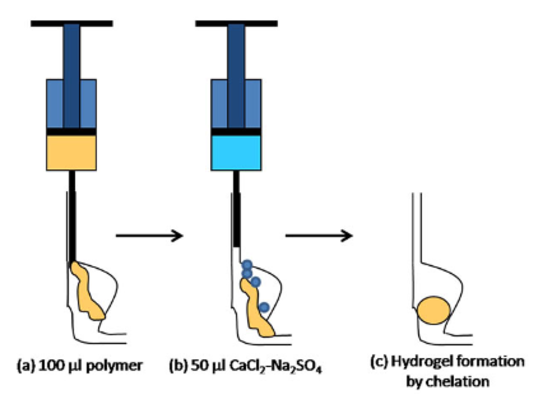 Schematic representation of the double gavage method. In the first step (a), polysaccharides are gavaged directly into the stomach. In the second step (b), the ionic solution is gavaged in the same manner, finally forming (c) a hydrogel directly in the stomach.

Figure 3: Interests of a unique biomaterial used as a drug delivery system by a comparison of different drug gavage treatments. 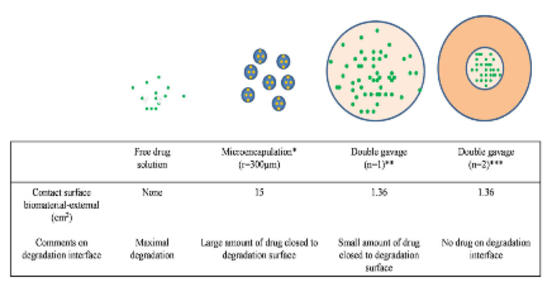 Interests of a unique biomaterial used as a drug delivery system by a comparison of different drug gavage treatments. Comparison is done in term of contact surface (cm2) between the biomaterial and the degradation external medium. Comments about how drug is exposed to external medium are shown. All calculations are based on theorical volume and surface with a volume given of 150 µL of hydrogel total.

Figure 4: Localization of dextran-FITC nanoparticles (fold increase) on the digestive tract after 3 days of gavage. 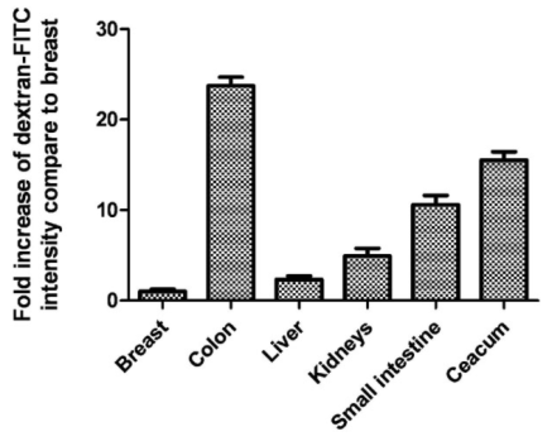 Localization of dextran-FITC nanoparticles (fold increase) on the digestive tract after 3 days of gavage. The increase (-fold) of dextran-FITC nanoparticles released from hydrogel (respectively 7 and 3 g/L of alginate and chitosan mixed) in regions of the mouse gastrointestinal tract. The minimum fluorescence intensity per mg of protein was based on the breast level, which was used as the control value (shown as unity in the plot)

Table 1: Some polysaccharides used in biology, medecine and biotechnology with their structural units and specific applications. 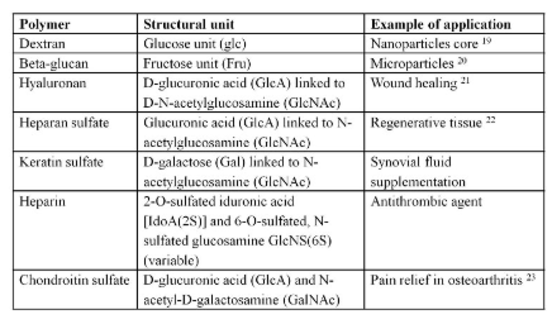