A low cost long term preservation of macromycetes for fungarium

The procedure of normal drying/ heat drying are to keep the freshly collected specimens under sunlight/ near artificial fireplace (Das and Sharma, 2005), and in a dessicator (40-50°C) (De Kesel, 2001; Buyck et al., 2010). These methods are known to maintain microscopic structures very well (Kendrick, 1969), yet, a dessicator/ drier may be too bulky for the field and also the macromycetes inventories are primarily undertaken during rains, therefore expecting a clear sunny day for drying specimens might not be a good idea either.

Specimens may be preserved in liquid such as alcohol, formalin, F.A.A., lactic acid and Kew mixture, however, these methods are accompanied by specimen’s loss of colour, inaccessibility, extreme fragility and bulkiness (Savile, 1962; Kendrick, 1969), furthermore, necessary macro / microchemical tests and molecular analysis could not be carried out with such specimens. Freezing of the specimens has been useful in preserving form and colour of the specimens; but, freeze dried specimens tend to be more fragile than air or heat dried specimens, and are more prone to reabsorb moisture, leading to rapid disintegration of fleshy specimens (Kendrick, 1969; Theirs et al. 2013). Although, Kendrick (1969) suggests shrinkage, distortion, accompanied by splitting or cracking and drastic colour change by normal drying/ heat drying method, yet considering feasibility of long term preservation of macromycetes, it is the best among these methods. Microscopic workout of specimens dried with this technique is hassle free, as fine sections could be achieved even with free hand, compared to specimens preserved with other methods. These sections when placed in KOH (3-5%) are able to fully rehydrate, providing detailed microscopic information. Furthermore, it is possible to extract DNA from such specimens, which may be used for their molecular identification.

The specimens thus processed have traditionally been deposited in fungarium within paper packets (Hawksworth, 1974; Das and Sharma, 2005). However, this method of fungarium deposition has met with disintegration of macromycetes due to easy moisture retention and insect/ mite infestation. Furthermore, their condition inside the packet could not be easily monitored due to opaqueness of paper.

The method of preservation discussed in current proposition intends for a low cost long term preservation of macromycetes processed mainly through normal/ heat drying for deposition in fungarium.

After the specimen is properly dried, it can be packed inside the transparent plastic bag as follows:

The time taken for a properly dried specimen to be sealed, labeled and packed within air tight container is around 4-7 minutes.

Sealing procedure mentioned in the brochure of sealer should strictly be followed. Inaccurate sealing (withdrawing handle too early) may lead to tearing up of the plastic bag/ leave pores behind.

The authors acknowledge Mr. Pranab Samanta for his incessant support regarding preparation of fungal specimens for preservation in fungarium of the laboratory. 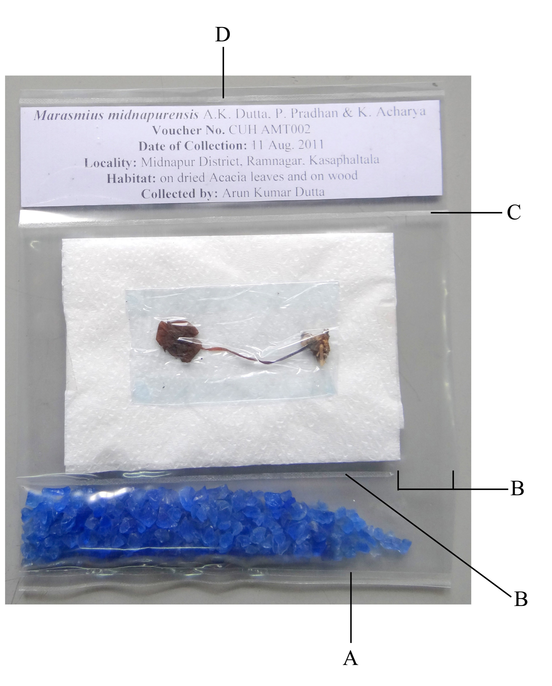 (A): The base of the plastic bag is to be sealed once more with sealer; (B): Adequate silica gel crystals may be inserted and then the bag is to be sealed in a way to leave open around 1 cm open towards any margin; (C): Processed macromycetes specimen may be place inside the bag and air may be drawn out gently and then sealed; (D): Fungarium submission data sheet concerning scientific name, family, accession code, field code, date and place of collection of data, name of the collector etc. cut to fit the size of the plastic bag may then be inserted and finally sealed. 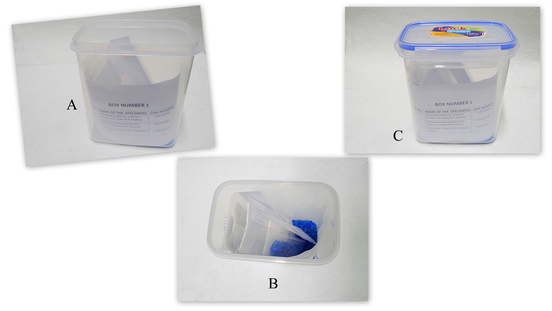 (A): The names and accession numbers of the specimens present in the box may be printed and put inside the box so that it is visible from the outside; (B-C): After filling up the voucher specimens, some silica gel may be put inside the box and the lid may be tightened properly.