We report a highly-sensitive chemiluminescent immunoassay (CIA) for the detection of human fetuin A (HFA), which is based on the leach-proof covalent crosslinking of anti-HFA capture antibodies on 3-aminopropyltriethoxysilane (APTES)-functionalized 96-well chemiluminescent microtiter plates (CMTP) using 1-ethyl-3-(3-dimethylaminopropyl) carbodiimide hydrochloride and N-hydroxysulfosuccinimide. It has more than 3-fold reduced overall assay duration than the commercial enzyme-linked immunosorbent assay (ELISA). Moreover, it has a wide detection range i.e. 0.3 pg/mL-20 ng/mL and 125-fold better analytical sensitivity than the commercial ELISA kit. The anti-HFA antibody-bound MTPs can be effectively stored in 0.1M PBS without any significant loss of functional activity. The developed HFA CIA is multisubstrate-compatible and can be employed for immunoassays on a wide range of commercially-relevant substrates that are being used in various biosensors/point-of-care diagnostics.

The development of a robust, rapid and highly-sensitive immunoassay format for the precise detection of HFA is an absolute requirement for clinical disease diagnosis. HFA is a highly specific biomarker for atherosclerosis (1) and hepatocellular carcinoma (2), which is also involved in diabetes (3), cardiovascular diseases (4), arthritis, metabolism-associated syndrome (5), and malaria6. It is a liver-derived protein that is secreted into the bloodstream in the concentration range of 450-600 µg/mL. The concentration of HFA changes significantly in various pathophysiological conditions (1,7-9). Several immunoassay formats have been developed till date for HFA detection, which were mainly based on ELISA (10-11), surface plasmon resonance (SPR)(12), microarray (13), and electrochemical luminescence (6). However, ELISA is still the most widely used format and the accepted clinical standard for HFA detection. But in recent years, several highly-sensitive chemiluminescent substrates, having wide detection range and improved analytical sensitivity, have been developed (14). The developed CIA (15), being the most sensitive immunoassay format for HFA detection in comparison to ELISA and SPR, can have potential applications in clinical diagnostics.

APTES has been widely used for the leach-proof immobilization of biomolecules (16-19) as it enables high immobilization density, long-term stability, high reproducibility, and less biofouling. It has been extensively employed for the development of continuous glucose monitoring systems (20-22). In the present study, the covalent crosslinking of antibodies in a leach-proof manner on APTES-functionalized bioanalytical platform leads to higher functional antibody immobilization density that results in highly sensitive analyte detection.

PBS Add a BupH Phosphate Buffered Saline Pack to 100 mL of autoclaved DIW, dissolve well and make the volume up to 500 mL using autoclaved DIW. Each pack makes 500 mL of PBS at pH 7.2, which can be stored at RT for a week and at 4 ºC for up to four weeks.

MES Add a BupH MES Buffered Saline Pack to 100 mL of autoclaved DIW, dissolve well and make the volume up to 500 mL using autoclaved DIW. Each pack makes 500 mL of MES at pH 4.7, which can be stored at RT for two weeks.

APTES The procured APTES solution has a purity of 99%. Reconstitute in autoclaved DIW to make 2% (v/v) APTES just before functionalization. EDC The commercial pack contains 25 g EDC. Reconstitute in 0.1M MES buffer, pH 4.7 to make 8 mg/mL. Aliquots can be stored effectively for six months at -20 ºC.

1.Incubate each of the desired wells of 96-well CMTP with 100 μL of 1% (w/v) KOH for 10 min at 37 ºC and wash five times with 300 μL of DIW per well. Washing can also be performed with an automatic plate washer. CRITICAL STEP KOH treatment should not be longer than 10 min as it may cause strong aberrations on the surface, thereby changing its surface properties.

2.Incubate the KOH-treated CMTP with 100 μL of 2% (v/v) APTES for 1 h at RT inside the fume cabinet. Wash the APTES-modified wells extensively with DIW (as described in step 1).

3.Mix 5 µL each of EDC (8 mg/mL) SulfoNHS (22 mg/mL) to make 10 µL of pre-mixed EDC-SulfoNHS solution. CRITICAL STEP The ratio of EDC and SulfoNHS is critical for optimum cross-linking. ? TROUBLESHOOTING

6.Block the antibody-bound wells with 300 µL of 1% (w/v) BSA for 30 min at 37 ºC followed by extensive PBS washing (as mentioned in step 5). CRITICAL STEP Use filtered BSA to remove any microbial or other contaminants. ? TROUBLESHOOTING

8.Add 100 µL of biotinylated anti-HFA antibody in each of the HFA-captured wells. Incubate for 1 h at 37 ºC and wash extensively with PBS (as mentioned in step 5).

9.Add 100 µL of streptavidin-HRP conjugate to the biotinylated anti-HFA antibody treated wells. Incubate for 20 min at 37 ºC and wash extensively with PBS (as mentioned in step 5). ? TROUBLESHOOTING

Troubleshooting advice is provided in Table 1.

The developed CIA detected HFA in the range of 0.3 pg/mL -20 ng/mL (Figure 2A) with linearity from 2.5-312.5 ng/mL. The limit of detection (LOD) and analytical sensitivity were 0.3 pg/mL and 5 pg/mL, respectively. The various experimental controls demonstrated the highly specific detection of HFA and non-interference of BSA with any of the assay components (Figure 2B). The inter- and intra-day variability were in the range of 2.1-6.3 % and 3-8.2 %, respectively, while the half-effective concentration (EC50) was 52 pg/mL. The intra- and inter-day variability were calculated from five assay repeats (in triplicate) on a single and five different days, respectively.

The developed HFA CIA significantly decreased the overall assay duration by more than 3-fold i.e. from 20 h (commercial HFA sandwich ELISA) to about 5.5 h. It has better analytical performance as its analytical sensitivity (5 pg/mL) was 125-fold better than that of the commercial HFA ELISA (625 pg/mL). Moreover, it has lower limit of detection (LOD) with better analytical sensitivity in comparison to our previously developed HFA immunoassay formats based on surface plasmon resonance (SPR)(12) and sandwich ELISA (10-11). The higher sensitivity of CIA is mainly due to the high functional antibody immobilization density on APTES-functionalized MTP and the higher sensitivity of chemiluminescent substrate (luminol/enhancer and stable peroxide solution). The enhancer in chemiluminescent substrate (14) results in rapid and highly intensified signal for a longer time, which enables wider detection range and low background.

The anti-HFA antibody-bound MTPs can be effectively stored at 4°C in 0.1 M PBS for many weeks without any significant decrease in functional activity (15), which is useful for rapid analyte detection in mass-use applications such as clinical diagnosis. However, as the developed procedure takes only 1.5 h for antibody immobilization, it will completely obviate the need of storing antibody-bound MTPs in industries, where they are usually stored for about two weeks.

Our previously developed modified MTP format (23), which was specifically designed to perform immunoassays on different substrate platforms, was employed to demonstrate the multisubstrate-compatibility of developed HFA CIA that was mainly due to the generic nature of APTES-functionalization step. Various commercially-relevant substrates, i.e. PS, PC, PMMA, CA, Zeonex™ and Zeonor™, were used as they are being employed extensively for various biosensors, diagnostics, lab-on-a-chip technologies, and other bioanalytical applications (Figure 3). 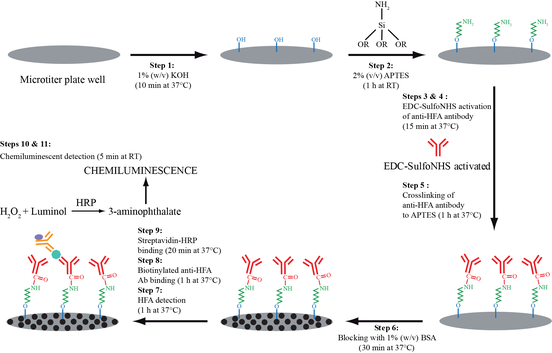 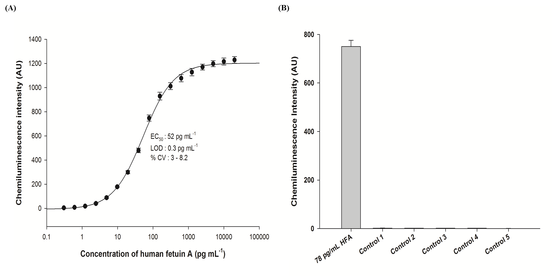 Figure 2. (A) Assay performance of the developed HFA CIA. (B) Various experimental controls employed to demonstrate the specificity of developed CIA for HFA and its non-interference with various process steps. The controls 1-5 were anti-HFA-no HFA; BSA-no anti-HFA; BSA-no anti-HFA-no HFA; BSA-SA-HRP; and, BSA-luminol, respectively (15). All experiments were done in triplicate and the results are shown as mean ± standard deviation. 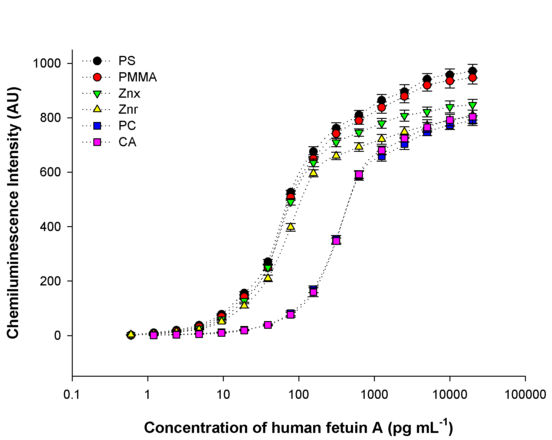 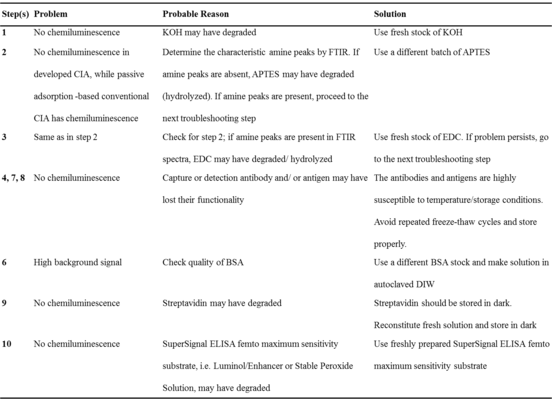 A sub-picogram sensitive rapid chemiluminescent immunoassay for the detection of human fetuin A. Sandeep Kumar Vashist. Biosensors and Bioelectronics doi:10.1016/j.bios.2012.07.067